A lot of people ask me if there is a such thing as Cleveland Pizza.  It is hard to pinpoint what that term actually means.  Cleveland is a place where at one point you could have thrown a stone and hit a mom and pop pizza shop.  It’s a place that I don’t understand for the life of me how chains like Papa Johns or Pizza Hut exist on the same astral plane as shops like Danny Boys.  I guess if you like cheap bread with canned sauce, something white and melty that resembles cheese with weekly coupons is the reason those places stay in business.  The joke goes there is no such thing as bad pizza or bad sex.  When you’ve had some of the best pizza I can tell you there is such a thing as bad pizza, and it comes from those chains.  Once you experience Danny Boys you’ll understand the difference.

I love the new wood fire oven pizza joints popping up.  Citizen Pie comes to mind, and it is amazing pizza, but when I think of truly Cleveland pizza Danny Boys is at the top on my list for what I would call Cleveland Pizza.  Renee and Rob Grendow recently opened an awesome new location in North Olmsted.  It has a small bar to sit and have a craft cocktail or one of the many micro brews they have on tap.  I sipped a Great Lakes Elliot Ness waiting for my Chicago Deep Dish to bake properly, and be boxed to take home.  The dinning room is spacious and loaded with all the Sinatra memorabilia you would expect out of Danny Boys. 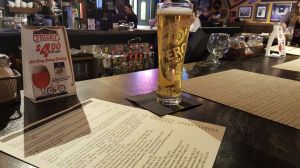 Last time I stopped in I was in the mood for one of their signature pasta dishes.  We started off with the fried zucchini.  It was golden brown and crisp with generous sprinkles of Parmesan cheese and that famous Danny Boys marinara sauce on the side.  Absolutely delicious.  For the main event I had Mama Sinatra’s Broken Lasagne; chopped penne, red pepper, onion, meat sauce, ricotta cheese, and baked with pizza cheese.  Of course every single meal is coupled with their amazing fluffy bread sticks.  Golden, soft, warm sticks coated with butter and a hint of garlic.  They are absolutely amazing to dip in a cup of their warm marinara or as a vessel to transport every last bit of that meat sauce if you are able to tackle the entire plate of pasta.

The portions at Danny Boys are huge.  The pasta dishes are enough for two.  Even the salads are a thing of beauty and completely filling.  The sandwich board reads like a Hollywood Deli with everything from the Big Lebowski (the ultimate stoner sandwich of loose ground meat, baked beans, BBQ sauce, fries, pickles and yellow mustard), to the Rocky Balboa (the classic meatball sub).  And don’t ever forget the individual sized Woogie Melts, the pizza roll up cousin of the calzone.  Load it up with your favorite pizza toppings or choose from their favorites like the Abe Froman stuffed with Ricotta, pizza cheese, sausage links (Abe is the Sausage King of Chicago by the way), onions, green peppers and sauce.

If you aren’t in the mood to sit and eat there is nothing wrong with picking one up to take home.  I haven’t had a true Chicago Pizza in years and was craving one.  Danny Boys is the only place you will find east of Chicago that does one justice.  Nice thick deep dish crust, generous heaping portion of pizza cheese, topped with a sausage patty, smothered in famous Danny Boys Pizza Sauce and finished with a some grated Parmesan.  It comes in small and medium only because a large would physically crush a human being.  I am not saying this is the stand in for Lou Malnati’s or Giordano’s but this is the best you are going to get in Cleveland period, end of story.  It is fantastic.

So, Cleveland Pizza, what is it?  For me it is Danny Boy’s.  It’s a couple of ice cold draft beers.  It’s friendly service.  It’s when a Dean Martin or Sinatra tune comes out of the overhead speakers, hell today it was the Clash tonight when I walked in the door doing Pressure Drop.  The sauce is sweet, the cheese oozes, and snaps back when you grab a slice.  The crust is crisp on the bottom and has a little chew to it.  It’s not New York fold over, it’s not Chicago deep dish (well, tonight it was).  It’s is simple fresh, quality ingredients.  It’s family business that treat you like a paesano, or famiglia.  Most importantly it is being able to stand the test of time because you make a damn fine pizza because you are consistent in quality, portions and ingredients.  Cleveland pizza is Danny Boy’s.

This site uses Akismet to reduce spam. Learn how your comment data is processed.